Right now, retirement is something I can only dream of, but for Popo it's 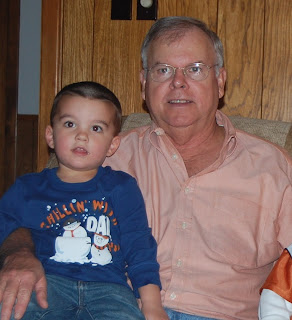 the real deal. A few months ago, LCRA got it's last day of work out of my father-in-law and he is now living the good life - coffee drinking with the men in the mornings, a workout at the gym (yes, he really does this), fishing, spending time in the rabbit barn and now there is always time for nap time. Of course I am selfishly glad he has retired because it gives us one more person to help out with the kids on sick days or if something comes up and we have been able to take advantage of it already. Truth is Popo is great with the kids and he loves spending time with them. I try my best not to spring all 3 of them on him at one time.
We will be celebrating his retirement tonight at the Green Door...
Happy Retirement, Popo!
Posted by The Maurer's 1 comment:

Birthday parties are becoming regular occurances on Saturday mornings. Seems that as soon as we take an invite down, another goes up. This past Saturday Austin & Avery were invited to a party at the skating rink, Brenham's very own Silver Wings. They were excited to get to go back since we had only been one time before.... for a birthday party. I can't say I was quite so excited because Wes had been asked to help out a friend with roofing a house so I was solo with all 3 kids. I knew it was going to be a challenge, a challenge that I accepted, but never again.
As we walked in the front doors, Avery & Austin fought over who got to carry the present. We made it inside and went to get skates. That left me carrying Caleb who wouldn't get down and 2 pairs of skates (heavier than I remembered) across the floor to the party table. Skates went on pretty easily, but we soon found out that Austin's skates had not been tightened and left him falling on the floor with every step he took. This we figured out on the skate floor as I am holding Caleb on my left hip, have Avery holding onto my left hand and am trying to hold up Austin as best I can with my right hand. I felt sweat rolling down my forehead and I refused to look up and see how many people were looking at us thinking "she is crazy." One of the mom's did come up and try to offer to take Caleb, but he preferred to see me sweat. It seemed like it took us 30 minutes to make it a few feet to the wall, but we made it. Austin's skates went off and I got him a new pair. With the new skates, we all made it all the way around the floor once and on the second round Austin saw the games and wanted to play. I wasn't getting stuck over there - "no money" I said. "I just want to look" he said. So he and Avery took skates off and went to check them out. This is when Caleb allowed himself to be unattched from my hip and darted off to one of the race car games. Avery wanted to play the basketball game in the other corner and of course at this very time Austin needed to go to the bathroom. Agh!!! We made it past that and made it back to the table where lunch was being served. Caleb got out of my sight while I was helping A&A get settled with their food and he proceeded to start eating someone else's pizza. Oops! After eating the kids played a little and Caleb tried to run across the floor to the car game any chance he got. One time he succeeded. Needless to say, I was questioning my sanity when we dropped off our skates and headed out the door. Wes called on our way home and the first thing I said was "I'm never doing that again." I was exhausted and even more frustrated when we got home and all 3 kids were still awake. I was for sure they were going to fall asleep on the way home and then I would have a little piece and quiet. Nope! It wasn't until I loaded them up an hour later and drove the backroads to Toppe's that they fell asleep. Then I unloaded them and treated myself to a run - stress relief and a little me time. It was just one of those days!
Posted by The Maurer's 1 comment: 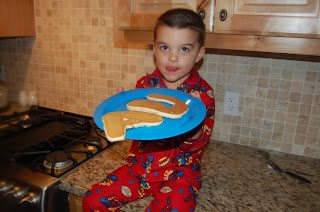 Saturday mornings often begin with pancakes. This past Saturday Wes got creative and we had a variety of letters/shapes/animals. I'd have to say my favorite was the "Bouncing Bear". Not sure the kids will ever let Wes make a simple round pancake again.
Posted by The Maurer's 1 comment:

Our social calendar has died down considerably now that the holidays have passed so we are somewhat back into a routine at home. Routine still involves chaos for us, but it's usually controlled chaos. Avery & Austin are almost three and a half and every day it seems they are learning something new. We had a good laugh the other day when I heard Avery singing a song to herself and at the time I just couldn't make out what it was. Well, after asking her to sing it again a little louder, we realized it was the country song "Big, Green Tractor". Austin then joined in on the singing. Apparently some of the boys in their class sing the song on the playground and they picked up on it. When I need a pick me up, I ask them to sing it! Caleb is on the verge of turning 2, though as I have said before, in our eyes he is already 3 because he does everything his brother and sister do. He is very vocal these days and if you don't answer him the first time he will be sure to say your name until you listen to him. He's a pretty demanding little guy, but it's hard not to give him what he wants when he stares you down with those baby blue eyes.
Posted by The Maurer's 1 comment: Brrr...... we've had some sub-freezing temps here the last few nights. The kids put cups of water outside yesterday and sure enough they were frozen solid this morning. Wes took Austin down to the tank and the edges were solid ice. We won't be ice skating anytime soon but it was still neat to see.
Posted by The Maurer's 1 comment: 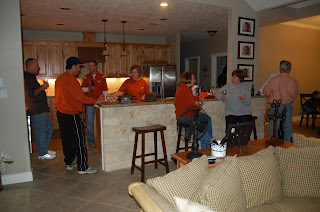 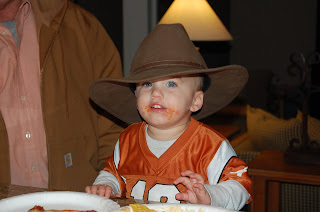 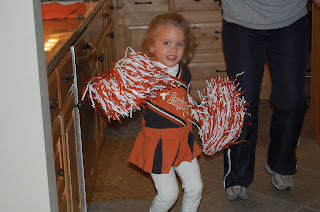 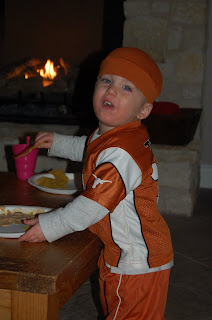 Our beloved Longhorns made it to the big show this year, the 2009 BCS National Championship. Wes was really hoping Santa would bring him a ticket to the game, but I think he put in his request a bit too late. Santa just couldn't swing it this year. Instead, we dressed in our burnt orange and cheered from our home with the fam. The outcome was not what we had hoped for as the Longhorns were defeated by the Alabama Crimson Tide 37-21. Now we get ready for next year. Hook 'Em!
Posted by The Maurer's 1 comment: 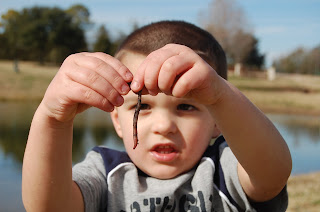 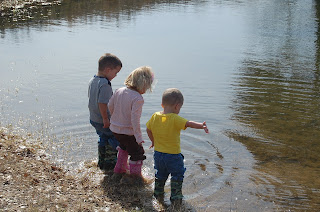 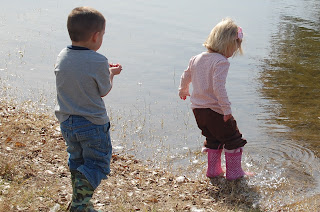 We stayed around the house New Years Day and thanks to the sunshine, the kids were able to enjoy a little outside time. Wes took them down to the tank for a little fishing, but it wound up being more of a "let's try out our new rubber boots in the water" adventure.
Posted by The Maurer's 1 comment: 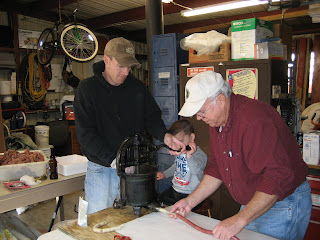 Austin got to spend the morning with the guys making sausage. This is an annual Maurer event, well as long as the deer hunting continues..... so he has many more sausage making mornings to come. 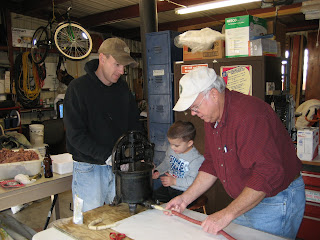 2009 is a thing of the past. For our crew, we had ups and downs, but mostly ups. Caleb had a lot of firsts this year - first birthday, first trip to the beach, first day of daycare, etc. It seems like he went from an infant to a 3-yr old overnight and he's not even 2! Avery continued to be her daring independent self, but showed her first signs of being a caring "mama" to her babies and any other babies she can get her hand on. Austin was able to get outside with his daddy more and do "Guy" things - fishing, gopher trapping, and he even got to go hunting with Wes once. I know there will be plenty more of this in the year to come.
I am excited to see what 2010 has in store for The Maurer's. I'll be sure to keep you posted! Happy New Year!
Posted by The Maurer's No comments: 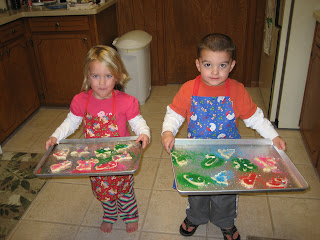 As I was gonig back through pics from the holidays, I ran across these of the Austin & Avery decorating cookies with Mimi, and I just couldn't leave them out of the blog. Thanks to Mimi, they get to see what real baking and cooking is all about. Mimi had told the kids that they could come over and decorate cookies with her this year and A&A didn't let her forget. I think they enjoyed eating the sprinkle sugar more than anything, but that all part of the fun. Here were their final creations.
Posted by The Maurer's No comments: