It's that time of year... time for camo jackets, camo pants, camo hats and anything else camo.  As the boys grow older, their interest in hunting grows.  A few weekends ago the boys headed to the deer lease in Mason to fill feeders and Wes's goal was to get Austin to shoot something on his own.  First night I got a text telling me that Austin had barely missed a pig. 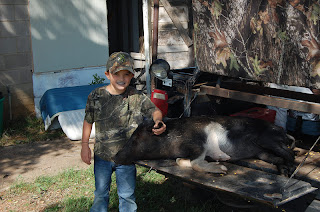 Next day, I got a text telling me that they found the pig and Austin had actually shot it in the shoulder.  He was pretty excited (so was daddy!). 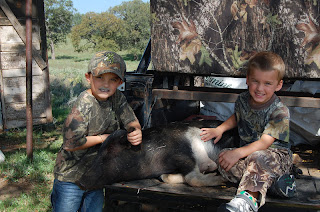 Caleb shared in the excitement.  Not sure if he will have as much of the hunting love.  Actually, not sure he'll ever be able to be still enough or keep quiet for longer than 3 minutes to sit in a blind.