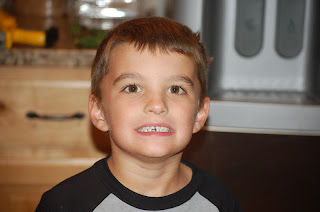 Austin has had a loose tooth for well over a month and we were about at the point of taking him to the dentist to have it pulled because of the tooth coming in behind it.  Last week we were on him every day to wiggle that tooth to try and get it out.  Friday afternoon, I  was pleasantly surprised as he ran into my office after school with a huge smile on his face and proudly showed my his tooth case that held the precious tooth.  Ms. Deramus (apparently known for her tooth pulling skills) helped him with that final tug and he was so excited!  Finally, he lost a tooth!
Fast forward a few hours to the Cub football game.  We were sitting up in the stands, a little more than half way up.  About 2 minutes after kick off I look over and tears are rolling out of Austin's eyes.  I asked him what was wrong.  I could barely understand him and he sobbed and let me know his tooth fell.  He had the case... the tooth was gone... under the bleachers.  My heart hurt for him because he was so proud of that tooth.  So proud he brought it to the football game.  Wes knew how much that tooth meant to him too and proceeded under the bleachers to look for the needle in the haystack.  After 2 quarters under the bleachers, the search was called off.  By that time, Austin had a little time to settle down and wasn't as upset.  First thing  he did was write a note to the tooth fairy explaining what had happened.  It read:
"I had a tooth but I jropd it at the cub stateeym but can you still give me sum munee.  happy halloween.  Austin"
It did the trick!!
Posted by The Maurer's