It's been a fairly "quiet" week at our house. Even this weekend we have things to do and places to go, but it should be fairly low key. For anyone out there wondering, Avery & Austin are 4 months away from their 3rd birthday and Caleb just turned 14 months this week. They each continue to take on personalities of their own.... amazing to see how different they can be being raised under one roof. 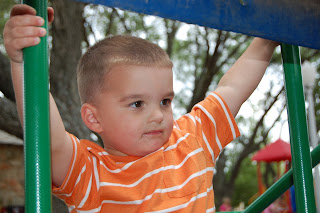 Austin - Big brother Austin has a heart of gold. Usually soft spoken, he prefers to be outdoors helping Wes. He loves to ride his gator around and follow behind Wes in the Mule as they feed the ducks, check gopher traps, and check the garden. I think he's going to have the common sense of his father, and that is a good thing. He helps keep his sister in line. He refers to her as "A-Vu-Re".... it's so cute. When he really wants her attention or she purposely ignores him he says "A-Vu-Re, A-Vu-Re Grace Maurer!"... that is when she knows she needs to listen... ha ha. Austin is a dreamer. We usually get woken at least 4 nights a week to him half asleep from a dream and sometimes we find him crawling into bed with us. 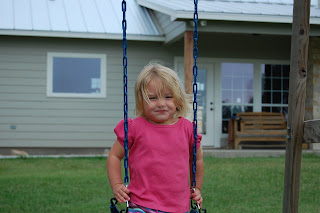 Avery- She's the hot shot. Girl is going to give us a run for our money. She's pretty sassy, but I can say she hasn't been in time out as much lately. She knows wrong from right and still does the wrong... and makes sure we are looking. She prefers to be inside for the most part. She has this thing about packing things into bags or backpacks and then carrying them into another room, unpacking them and then repacking. A little OCD??... it keeps her busy. If I had to guess, I'd say she is going to very good at gymnastics... she's limber and loves to climb and doesn't seem scared of much. We may be making emergency room visits in the future with her?!? Unlike her brother, when night time rolls around she gets crancky and is ready to go to bed and we don't hear a word from her until the morning. 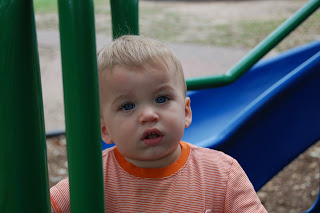 Caleb- He's a pistol. I'm hoping the fits he has been throwing are just a phase, many people told me it's being the second child/pregnancy. I don't remember Avery or Austin being so stubborn. When things aren't his way or he doesn't get something he wants he throws himself on the ground and it isn't pretty. Let's hope this is a short phase. He is a DADDY's boy. Put Wes & I in a room and he will go to Wes everytime. He loves being outside... loves riding on the Mule with Wes and loves watching the ducks walk around. He's saying a few words, "daddy" of course and the occasional "momma." He's a great eater, but wants to feed himself which has made for some very messy meals with spaghetti and yogurt. I've come to the point that I'd rather clean up the mess than hear him fuss. He does have an infectious smile and some beautiful baby blues. When he looks at me and buries his head in my shoulder playing peek-a-boo, it just makes me laugh.

Together all 3 get along fairly well. Austin & Avery are best friends... they know each others next move. They play together well, but we have noticed there are days after school that they would rather play alone and I am sure that is from being with each other all day long... like all of us, they need their space. Caleb is getting in the mix and that can be a good thing, but usually ends in one of the twins yelling "mama, can you come get Caleb?" Many afternoons consist of the guys playing outside and the girls inside, Wes & I doing chores and the kids playing. It works for us for now......
Posted by The Maurer's

Are these pictures with the new camera? Austin looks cute with his new hair cut. He's ready for the summer heat!

Yes, still learning how to use. I can tell I am going to LOVE it!