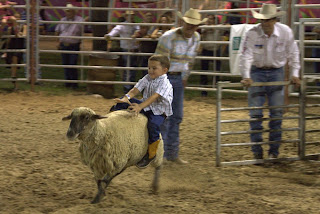 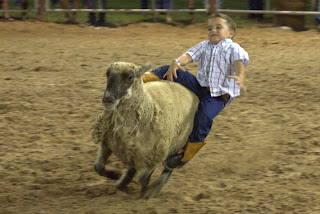 Austin rode a sheep!!!
I can't say I know much about rodeos. Sure I know they involve cowboys, clowns, horses, and bulls but I'm not versed in all the events and lingo. In fact it wasn't until last year that I heard of "mutton bustin'" aka sheep riding. Apparently this is an event for youngsters to get a taste of what bull riding is about, or I think that is what it is for. A few nights before the fair this year Wes asked Austin if he wanted to ride a sheep at the fair, a real one. Austin's response: "sure". So when got to the fair Wednesday night, the only night mutton bustin' would occur at the rodeo, Wes and Austin went to sign up. Both Wes & I would not have been surprised if once being around the rodeo arena, Austin backed out, but we were wrong. They signed him up and we were to be back at the arena around 8pm. We brought along a small cheering crowd and I was pretty clueless of what to expect. I was still doubting that he would get on and ride once he got down into the arena and he saw others ride. I think there was a small part of me that wanted him to change his mind.... my little guy might get hurt! Once again, I was wrong. Our brave little guy climbed up on that sheep, hugged his neck tight, and had a less than glorious ride. We were so proud! He still has a long way to go if he wants to do the mutton bustin' rodeo circuit, but just knowing he climbed on and stuck with something he said he was going to do makes me one proud momma and I know for a fact, he's got one proud daddy! Of course it also scares me a bit. What's next!?!?
Posted by The Maurer's