Spring Break 2012 - it's a wrap.  Tuesday I was able to get out of work early and pick up A&A&C for a date to the movies.  Confession - this is only the second time I have been to the theater with the kids and they have been at least a dozen times.  I'm not a big movie buff.  I don't mind skipping the big theater opening and renting from Red Box for $1.00.  After our $49 movie and snack bar date, I think I'll stick to Red Box.
Wednesday Mimi and Popo treated A&A&C to a trip out of town.  They headed to Austin to stay with Uncle Jason for the night and then went to Bertram for a steam train ride to Burnet. 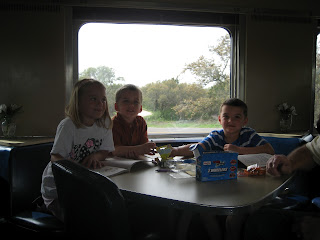 Coloring on the train. 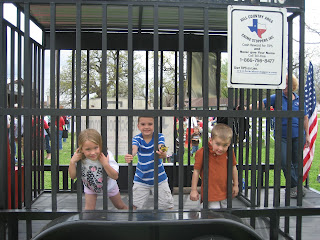 They just couldn't behave so they got locked up... kidding of course. 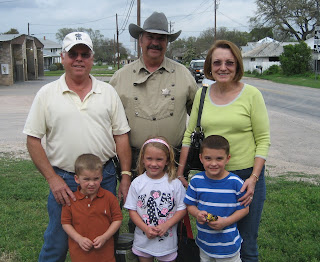 Mimi & Popo and one of the gun men from the gun show that was at the half way point of the train ride.


Posted by The Maurer's