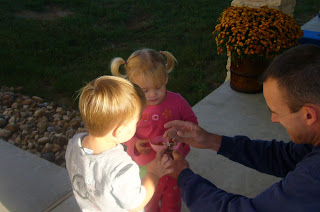 Two weeks ago, we went to Della Jasinski's bday party (butterfly theme) and part of the party favor was a catepillar in a small plastic container. It came with instructions (thank goodness) and better yet they stated that all we had to do was set the container in a safe place and the catepillar would turn into a cacoon and then into a butterfly. My initial thought was "Yeah, right." But, I gave it a chance. I set the 2 plastic containers in a corner in the kitchen and paid very little attention to them. Earlier in the week I did notice that both had formed a cacoon and truth is, it was pretty cool. Well, yesterday when we got home, Wes brought out the 2 containers with 2 live butterflies in them. We had a ceremonial release... if you want to call it that. We're pretty lucky they were both alive because Austin was very interested in stepping on them once they were out of their containers. It was a pretty cool thing to see!
Posted by The Maurer's