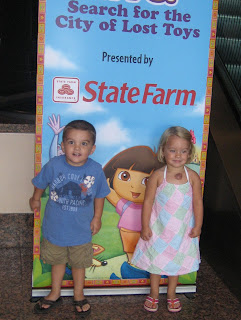 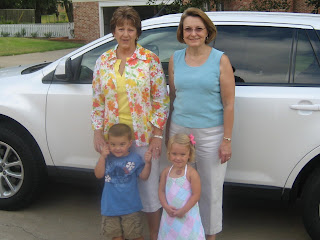 A few months ago I found out Dora LIVE was coming to Houston and I thought that would be a fun thing for Avery& Austin to go see. Dora is one of the only shows they will sit and watch. Dora speaks some spanish, so it's educational, right? Wes and I were originally supposed to be out of town this weekend so I sweet talked Mimi and Toppe into taking them. I can honestly say they weren't quite as excited about the idea as I thought they would be when I first presented it to them. I'm sure the idea of taking 2 toddlers to Houston to a show with tons of other toddlers to watch a cartoon character that they know nothing about didn't sound very exciting, but they played along and agreed to take them anyway.
Our plans fell through and Wes & I wound up staying in town, but Toppe & Mimi still took A&A. From all the reports, everyone had a fun time. A&A watched Dora intently and Avery didn't flinch when Swiper came on stage. Before they left, she kept saying she didn't want to see Swiper because he scared her. Now she says that was her favorite part of the show! Anyway, after the show the crew went to The Aquarium thinking it would be a fun eating adventure, but apparently just about everyone else thought the same thing and the line was out the door. Instead, they hit the gift shop and still got to see the aquarium tanks and then lunch was a magnificent combination of chicken nuggets and fries.... a McDonalds feast.
THANKS Mimi & Toppe for taking A&A to see Dora!!!! They have been talking about it ever since.
Posted by The Maurer's