For those of you reading who don't know my family that well, then you don't know that my father, aka Grandpa Otto, is obsessed with baseball. Truth is, it is in his blood.... no lie. We all love him, but truth is there are few things in his mind that rank above America's favorite past time. I have grown to accept that grandpa will most likely miss the kids school functions due to baseball tournaments, but I know he'll do what he can to make it to every tball game and the kids are sure to have a designated pitcher any time they want to take a few practice swings.
One of Grandpa Otto's favorite annual events is "Brenham Day at the Disch." It's when the men of Washington County hook up their bbq trailers and take them up to the parking lots of the UT baseball field and bbq a full spread of meat - chicken, ribs, sausage.... the works. It's a tailgaters dream. The day is all about the three B's - Baseball, Bar-B-Que, and Blue Bell (ok, there are 4 - Beverages) and of course those all are favorites in Brenham. Depending on what is going on in Brenham, a large Cub crowd comes up to watch the Horns and overtime a large Austin crowd has followed in the tradition. The tradition also includes feeding the baseball team and their parents after the game.... and even with that, there still tends to be meat left over.
Our crew was able to take in Brenham Day at the Disch with Gpa Otto this year. Wes was part of the bbq crew so he followed in the UT tradition of getting there early. The kids and I made it down around 11:30am, 2 hours before game time. Shortly after, we realized that the night before at Uncle Jason's plus a trip to the park that morning made for very cranky kids, so I drove around for a while and let them nap in the car before we went into the game. Once we had somewhat rested kids, we were able to enjoy some college baseball. We got great tickets (Thanks, Matt) that were just rows down from the press box behind home plate and most importantly, in the shade. We couldn't have asked for the kids to do any better during the game. It helped that the game was over in under 2 hours - fastest college baseball game I've ever seen. At the end we stayed around to join in the traditional "Texas Fight". Hook 'em! 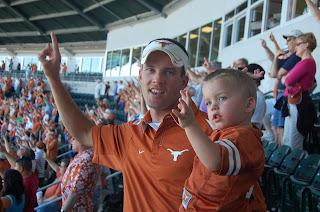 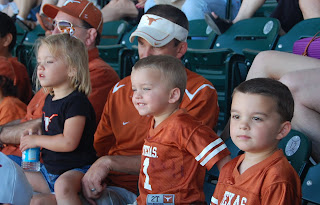 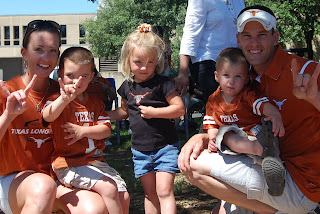 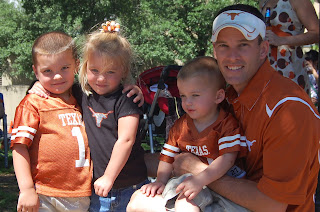 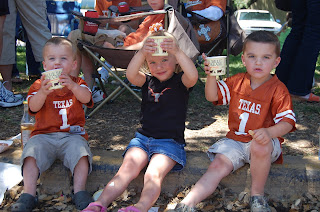 I scream, you scream, we all scream for ice cream! After the game, the kids helped hand out Blue Bell to all the UT baseball players who came to the tailgate.
Posted by The Maurer's

Because Cartier Watches does what no other Watches Company has, Replica Cartier Watches is a complete replacement of the usual gears and pinions used in mechanical movements. The gears and pinions typically used have been replaced with belt drives and Chanel Watches bearings. Each belt, of which there are five, measure as big as a human hair, making the integration and functioning of Replica Chanel Watches seem almost impossible, but TAG does it.