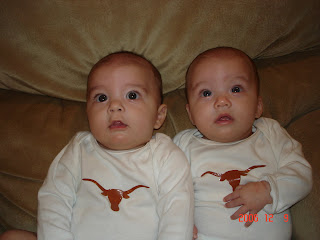 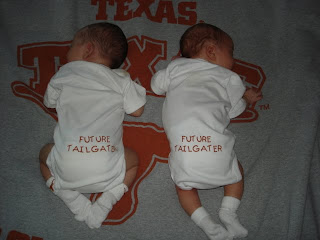 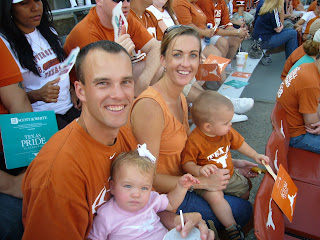 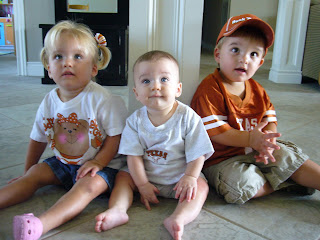 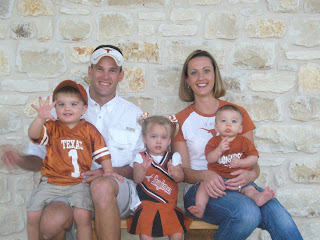 These are all pics of our Longhorn past. I was not a very good Longhorn mom yesterday and didn't get the kids dressed in their gear (in fact they were in jammies until at least noon) for opening weekend. Next week... promise and pics will surely follow. College football has been and surely will continue to be a big part of our lives. If we were still in Austin we would for sure be taking the kids to tailgate and watch the games. Since A&A were born we have made it up to at least one game a season and will hopefully be able to make a few more once the kids get a bit more manageable and one day bite the bullet and get season tickets. We did attempt to take A&A into the stadium for a game just after they had turned 1. You should have seen the looks on some of the peoples faces as we were walking up - "Are they crazy?!?" Yes, we were, but we made it a full quarter before walking back and watching the rest of the game in the shade on a big screen at the tailgate.
Wes & I have many happy memories from Texas Longhorn football. Wes is UT alum and we watched many a football game on the 50 yard line, thanks to his college roomies! I call myself an adopted Longhorn since HBU didn't have a football team. We hope we are able to share some great UT football memories with Avery, Austin, & Caleb in the future. Hook 'Em!
Posted by The Maurer's