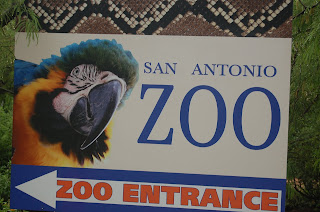 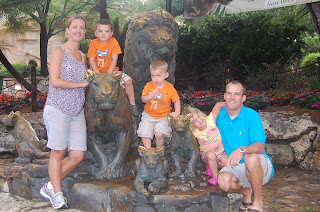 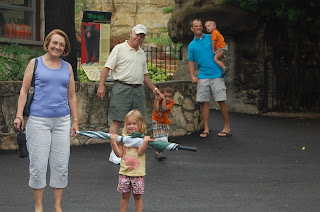 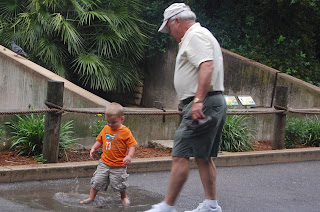 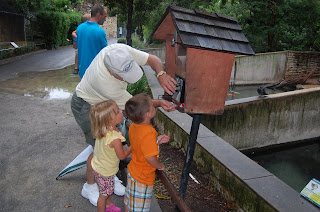 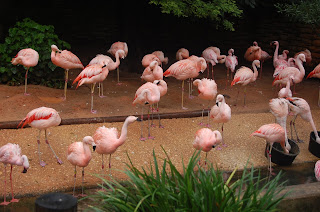 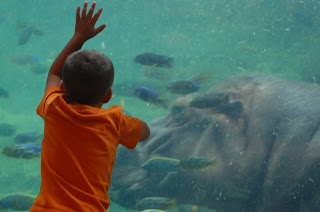 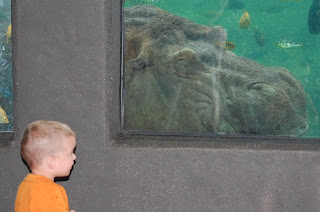 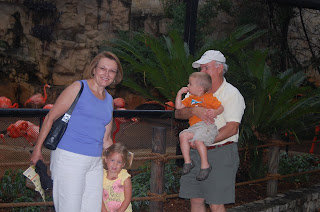 If you have looked closely through all the photos, you may notice that something is missing. Look again. Can you figure it out??? Well besides the Maurer Crew, which includes Mimi & Popo, there are no other people. We got to view the entire zoo by ourselves.... well, not exactly. After the monsoon rains Friday which lasted past lunch time, we decided that since we were in the downtown area at the Children's Museum, we should go to the zoo, even if there were still rain clouds in the sky. We got to the zoo around 2pm and as we drove to the entrace, I honestly thought we were at the wrong parking lot. There were literally only 6 other cars. Wes went to the front gate to check things out and minutes later we were walking on zoo grounds, umbrella in tow. There were no lines, no crowds, no need for breaks in the shade. The down side was that with the rian, some of the animals had been kept in their indoor habitat, but we still saw plenty of wildlife. Austin was so animated about anything new he saw "Aw... Cool mom. Look, look!" His eyes would get big and he'd point and make sure his brother and sister saw what he thought was so cool. One of the highlights was feeding some of the fish.... um, can't we do that at home? I guess it is a bigger deal at the zoo.
We lasted about 2 1/2 hours at the zoo. With no crowds, we walked through the grounds pretty quickly and by 4:30pm we had 3 exhausted kids. It was time to head back to the hotel for a nap and some pool time.
Posted by The Maurer's

Style: Creators of replica handbags design replica handbags around the latest and hottest trends in the fashion accessory industry. At Top 1 replica louis vuitton , we carefully study each of replica handbags seasonal lines, then hand-pick the most popular items for replication. Our inventory reflects the most in-demand replica bags , wallets, and sunglasses.