Rain... Bring it on! As we were walking out the door for church today Wes made sure we had an umbrella in the car because it looked like rain was on the way. Sure enough, we met the rain on our way to church and it continued on throughout the day. We need more, but we are thankful for all that we received today.  It was so nice to see the heavy clouds linger and see the drops fall for longer than 30 minutes. 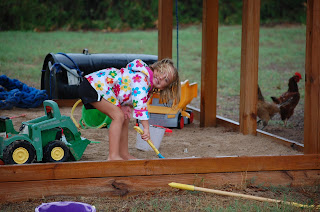 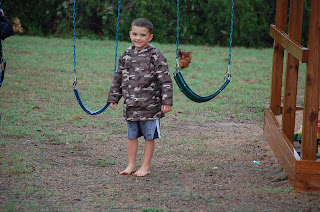 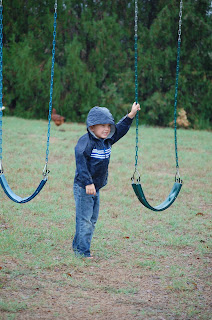 It felt like the kids were seeing snow.  We broke out the rain jackets and they played out in the rain all afternoon.  While they enjoyed their time in the rain, Wes & I headed up to the loft above the garage.  The "loft" has become a storage area and we are hoping to one day turn it into the originally planned big game room, but we've got to downsize our "stuff".  It is crazy how much you can accumulate in just a few years.  We are getting ready for a garage sale, so we spent a few hours going through toys, clothes, tools and just stuff that is of no use to us.
After filling up my car and the back of Wes's truck with "stuff", we were going to make a family trip over to Granny G's house where we are having a garage sale in a few weeks.  I was upstairs when Wes told me it would probably be best if he went alone. He said the kids were filthy and buried in sand. 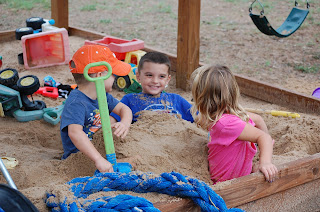 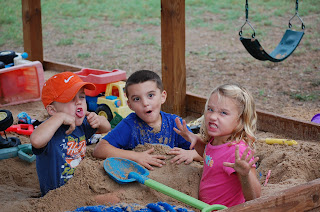 Sure enough this is how I found them, literally buried sand.
They played for at least 3 hours this afternoon without a "mom, she hit me" or a "mom, will you get me this" or a shrieking cry.  They were in their own little world and I even had to bribe them to come inside for a shower.  It was wonderful!
I have to add that after they brought themselves out of the buried sand, they ditched all clothing below their waist.  They thought it was fun to swing without underwear and I saw their bare bums as they repeatedly ran to the swing, stomach first, to fly like superman.  Ahhh... the joys of  being a country kid!!
﻿
﻿
Posted by The Maurer's