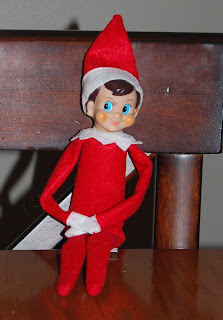 Little Red showed up under the playroom Christmas tree when we got home from Santa pictures Thursday night.  Caleb found the box under the tree and we were all excited to see what was inside... it was our very own "Elf on the Shelf."  The book we read let us know that Little Red was a scout elf who will be watching over Maurer Party of Five and reporting back to Santa every night until Christmas.  He has magic powers and we can't touch him or he will lose some of his magic and may not be able to make the North Pole journey.  The kids weren't that into it at first, but as I was sitting by the Christmas tree in the living room reading to the kids, Little Red got out of his box and magically appreared on the mantle.  It even took me by surprise, but Wes was being sneaky and ever since then the kids are true believers. 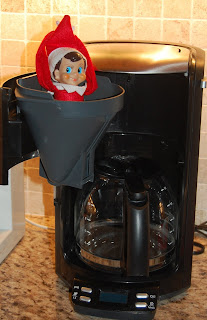 There are websites and blogs dedicated to this little guy and creative ways for him to be found every morning.  So far we have found our elf in the on top of a mirror, in the coffee pot, and sitting at the table enjoying a powdered donut and chocolate milk out of a straw....  not sure what tomorrow will bring.
As for our elf's name, the kids were set on Little Red the first night.  Wes convinced them that he needed a middle name and Caleb thought it should be "Shuga", like Malcolm Shuga Brown from the Brenham Cubs... future longhorn.  So Little Shuga Red it is....  We are having a lot of fun with him so far!
Posted by The Maurer's