One thing about sking, it wears you out.  By the end of the day there is no desire to burn the midnight oil. After a good night's rest we were up by 7am, filling belly's for another day of sking and starting to layer. Day 3 we added an extra accessory... mustaches. 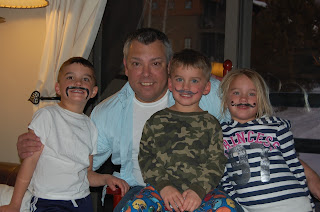 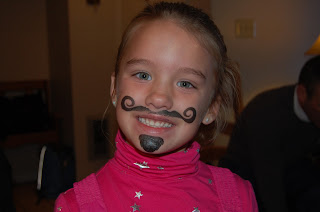 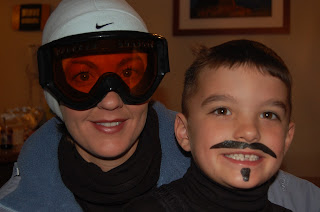 With one day under our belt, we were more comfortable getting where we were going around the mountain base.  The 5 of us stayed together for the day.  After a few trips down "Preview" we were off for the top of the mountain.  The kids had a few spills, but was to be expected.  They would get frustrated trying to get back after a fall, but after a little practice and patience, they were on their way  again.  We met up with the nonskiers for lunch at Bear River Grill at the mountain base.  We needed to refuel and thaw out before a few more hours on the slopes.

Avery showing how to "pizza"﻿
This is how Wes and Caleb skied day #2 & #3.  These straps were lifesavers.  Caleb wasn't quite strong enough to come to a stop on his own.  He wasn't scared to let loose and ski fast and we were a little nervous about cutting him loose.
Austin... this guy really surprised me.  He was zooming down the mountain.

Night #3 we opted for dinner in downtown Steamboat.  We hit up an Italian spot named Mazzolas.  I highly recommend!  It caters to big groups with kids.  They even gave the kids pizza dough to shape and then they baked it.  After another full ski day and full bellys, we were longing for our jammies by 9pm.  We tried to be party animals and play cards, but we only made it until 10pm.
Posted by The Maurer's