We were a little slow getting going on our 3rd day of sking.  I was excited to be out in the snow again but not excited about slipping on ski boots.  They were starting to feel like carrying 25 lb dumbells.  After breakfast, Jason chauffered us down to the mountain base. 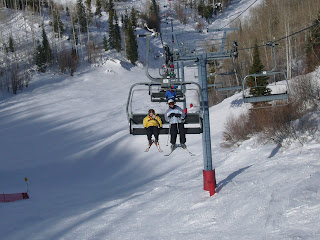 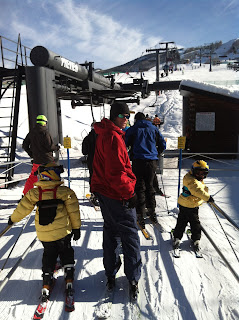 After spending the morning on the mountain, we stopped for lunch at Slopeside Grill... that place made me even want to get a hamburger.  Best burger I've tasted in a while.  It was at this time that I determinded I had rode my last lift.  We were all worn out and Avery & Caleb were ready to call it quits too, but Austin was determined to ski a little bit more.  Wes, though exhausted himself, agreed to take Austin back on the snow and Avery & Caleb & I went back to the condo to get warm and get out or our marshmellow clothes. 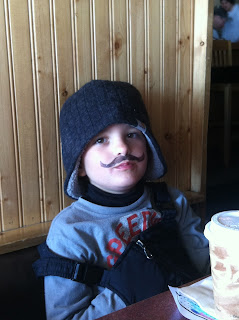 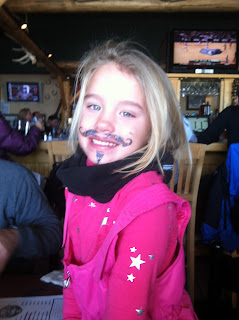 Later the guys met up with the grandparents at the mountain base for the 39th Annual Bud Light Cowboy Downhill.  Imagine cowboys in chaps on skis after a morning of drinking, sking straight downhill with a few jumps.  Quite a show!  Avery & I opted for downtown shopping but everyone at the cowboy downhill seemed to have a great time. 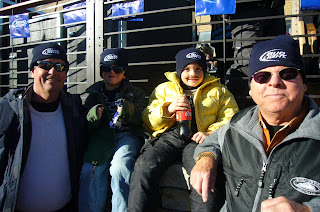 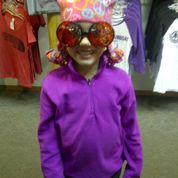 Monday night we had a sleigh ride scheduled at Saddleback Ranch.  The horses were huge, the sky was beautiful, but it was COLD!!!! 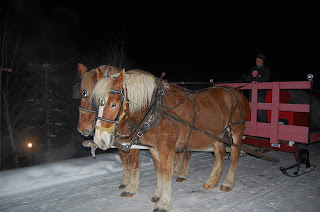 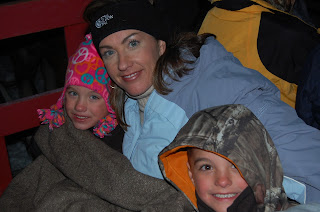 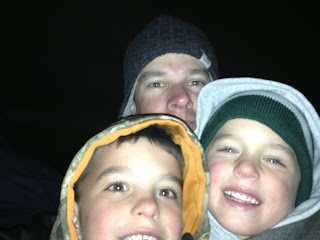 This is the beautiful ranch hall we rode to.  Inside we had down home cooking - steaks and salmon.  The ranch is about 800 acres and run by a local Steamboat family.
Warming up. 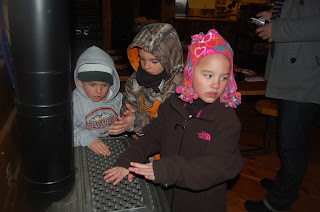 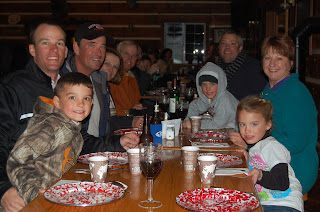 After dinner, we were entertained with a lasso lesson from a real cowboy.  Avery gave it her best  and roped the metal bull.  It was funny to watch the city slickers get such a kick out of the lasso lesson and our two-step opportunity.  We Texans showed them how it was done! 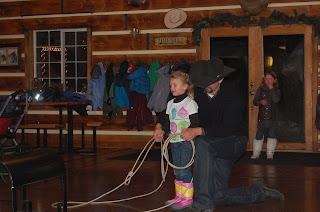